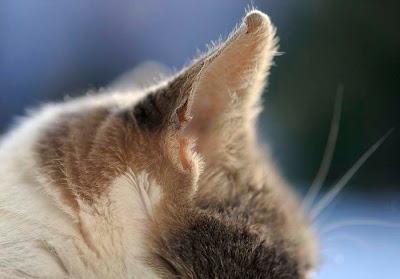 I've seen a lot of stray cats pass through my back yard, looking for a morsel or two. Pistachio and Hazel are permanent residents, but a banged up stray who has been coming through for about two years has also taken up residency. He has managed to worm his way into my heart. At first I was put off by his ragged looking coat, scratched up nose and ears that looked like serrated knives. I thought he was nothing but a trouble maker and kept my distance. He started rubbing up against my leg and he let me pet him. I knew then that he had belonged to someone and was "ditched". So, Ringtail joined the dynamic duo, Pistachio and Hazel. In fact, he even earned his own house out back. Now, I often walk into the kitchen to see Pistachio sitting on one window ledge and Ringtail on the other. He has a lot of battle scars, but I love seeing his chewed up ears through my window. He has settled in and I think he knows he has a home now too.
Posted by Aud at 10:20 PM

I never knew about Ringtail ... his color is beautiful; and I just warm up in hearing the story. Sure does sound like he was a member of a human family at some point - thank you for taking him into the the fold. And, for sharing the story.
B

You're sweet to save him too. You have quite the bunch. Does Slugger communicate with the outside cats through the window?