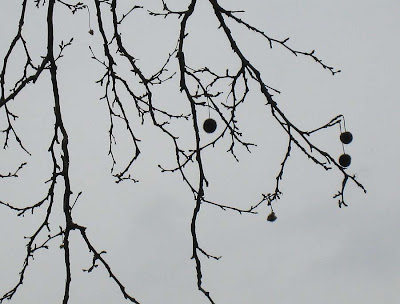 I felt the influence of my Mom today as I searched for a photo to post to my blog. She would often point out different trees to me when I was young, the pin oak in the front yard which she has always detested, the pine tree in the backyard that my Uncle planted as a small little sapling more than fifty years ago. She never gave it a chance and now it is so tall it towers over the telephone pole and lines. There was a beautiful dogwood outside the window of my childhood bedroom, that became diseased and had to be taken down. I recall that Mom would often recite Joyce Kilmer's famous poem "Trees" to me as a child and later on the poem became part of a class project for her grade school students. After she retired from teaching she gave tours at a botanical garden and the highlight of the tour was the very rare Franklinia tree. Today I drove down Sycamore Lane in my neighborhood and as I looked up I spotted seed pods dangling from the limbs of what else, a sycamore tree. Almost monochromatic it looked a bit like an etch-a-sketch drawing. I recalled the closing verse of Kilmer's poem (guess Mom helped me commit that to memory) "Poems are written by fools like me, but only God can make a tree". I noticed how clearly the limbs separated from the sky and the clean lines in this photo. Kilmer's poem took on a new meaning.
Posted by Aud at 8:43 PM