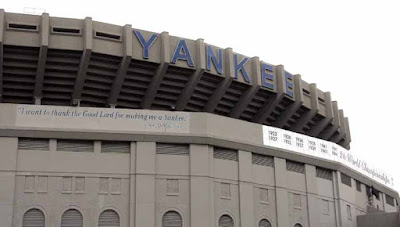 I admit it I am a diehard New York Yankees fan. I think it is genetic. Sixty five years ago one of my parents first dates was a 1943 New York Yankees and St. Louis Cardinals World Series game. If you were born into my family, it was predetermined that you were a New York Yankees fan. Anything else was not only unacceptable but heresy. Today as I looked up at the stadium's facade I thought of the countless times I have had made the trek to 161st Street and River Avenue to see the boys of summer play America's pastime. Today with storm clouds forming over the Bronx, my heart felt heavy because next year the Yankees will play in a new stadium. My only consolation is that the new stadium is right next door and thankfully the Bronx Bombers will remain in the Bronx.
Posted by Aud at 11:30 PM

Love reading your blogs! I'm all about genetics!